The power generator is the beating heart of MPO, the source of its electrical power. Via the Power Control Console, its output can be directed to the various sectors of the station. A powered sector becomes accessible by tram, and - if they are in working order - its life support systems will become active.

The fusion generator can theoretically power the station for an unlimited time, but, at some point before Albert West's escape from his cell, it was damaged, and its generator cores are gradually degrading as a result.

The power generator is a large room at the north end of Central Control, containing twenty-four points of interest. Sixteen of these contain reactor modules, and the other eight serve as turrets, but are initially empty. The cores begin with about 650 durability, which gradually declines over time. The generator's total output is equal to the sum of the durability of all of its installed cores (plus 1500), so repairing the cores that already exist, or building entirely new or improved ones, should be a priority.

In addition to the southern entrance that West can enter from, the power generator room has three other hallways in each of the other cardinal directions. Each of these hallways is polluted with radioactive waste, causing constant damage to West if he trespasses. These are the mutants' points of entry during invasions. The eastern hallway also has a storage container (just before the waste) that contains an extra, brand new reactor module, perfect for starting research.

A reactor module must be placed into the power generator in order to actually generate power. Like most items, reactor modules have a durability that will very slowly decrease while the module is being used by the generator. This durability can also decrease more drastically during a mutant invasion if a mutant manages to land a hit on the module.

The Nano Reconstruction Bay can be used to slowly restore depleted cores, but initially can only return them to 50% effectiveness. Software upgrades will improve the speed and efficacy of the repairs, but producing new and improved cores will become necessary later on.

Sacrificing one of the reactor modules to research it in the Tech Research System will provide West with the blueprint necessary to create more at the 3D Printing System, as well as lead to development of superior cores with improved durability (and thus higher power generation).

At least one reactor module must be powering the generator. If every single reactor is empty or destroyed, the game is immediately over. It is worth noting that modules that are destroyed during invasions are truly destroyed; there will be nothing to repair. 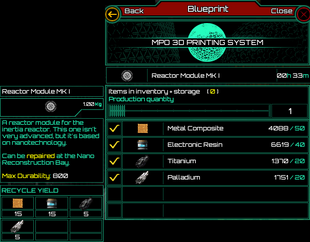 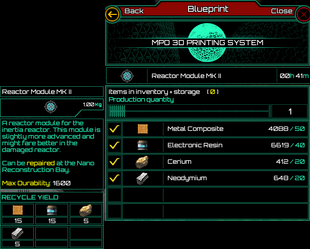 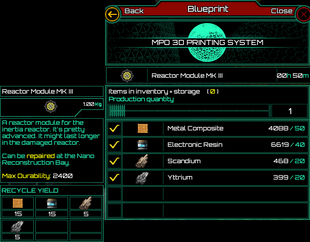 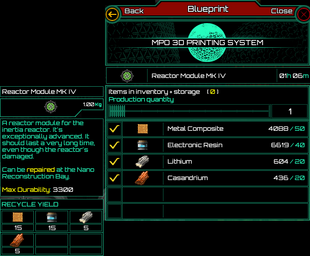 The eight turrets can be armed to defend the Power Generator if it comes under attack. Any SMG that West can find or build can be placed into a Turret Controller in the generator room, allowing the turret to make use of the weapon until it either overheats (at which point it will cease fire while it cools down) or breaks (in which case West will need to either fix the broken weapon or replace it).

SMGs are not great weapons for actual combat in many cases, so it can be easily worth it to toss any and all found SMGs into turrets. Even the most basic SMG can be a strong ally during an invasion by disposing of weaker enemies so that West can focus on the bigger threats.

If West allocates more power to the colony than the generator can produce, there is a chance that the generator will overheat. This chance can be seen in the Power Control interface, and scales with how much excess power is being produced, up to a limit. It is unknown how frequently this chance is checked.

If the chance of overheating occurs, the generator will completely overheat in exactly three hours. West can deallocate power to below the generator's capacity to prevent overheating from completing. If the three hours pass, all sectors in MPO will be shut off. Since the tram requires power to function, an overheat can strand West in a remote location. However, if he's in the middle of a tram ride, it will complete its route unhindered.

If the overheat timer begins, the timer does not instantly restart once power is deallocated. Rather, the generator must very slowly cool off, slowly replenishing the timer. If overheating occurs again soon after, only the remainder of the timer is used, not the whole three hours. For example, say that the generator begins overheating, but power is deallocated at the two hours remaining mark. If power is reallocated and the overheat chance is hit again a few minutes later, then the overheat timer will only be around two hours, instead of three, since it didn't have time to cool off yet.

Once the invasion arrives, West must fight off a wave of mutants that come from the east, north, and west hallways in the power generator room. These mutants will primarily target the reactor modules, but may attack West if he is nearby. Each turret is in position to defend at least two modules, so arming even a few of them can make defending the modules significantly easier. Once all of the invading mutants are dead, the invasion ends. If all of the reactor modules are destroyed (or removed), game over.

Retrieved from "https://subterrain.fandom.com/wiki/Power_Generator?oldid=4706"
Community content is available under CC-BY-SA unless otherwise noted.