Murray Space Center is the local space station for MPO. It is located to the east of Central Control, along the same track as Carson Hotel and District Gemini. It is accessed via tram, but it is locked by the Space Center Keycard. It takes 1 hour 44 minutes to reach it from Central Control and requires 5000 units of power to be active.

Murray Space Center occupies one floor and has its own oxygen and thermal generators, although these are initially broken. The center and east parts of the floor are occupied by tourist attractions: display cases showing off jewelry made from various Martian metals and a large food area. The west area seems to be luggage storage and has an abundance of miscellaneous items, as well as the generators (the oxygen generator is locked behind a Class A lock. The southwest area is the control station, and holds the Space Suit Plans as well as a journal (none of the computer consoles ever contain anything). The northern portion is dominated by three launching pads and some large containers; it is here that Albert West finds that Shuttle 2 is not launched, and decides to use it to escape MPO. A Broken Navigation Module is found near the shuttle and is essential to launching the shuttle.

Shuttle 2 is the last remaining shuttle on Mars, and therefore West's only hope of escaping the planet. A Broken Navigation Module is found near it and must be researched in order to produce a functional Shuttle Navigation Module. In addition to the module, the shuttle requires five units of Space Shuttle Fuel, which can be produced after researching the Shuttle Fuel Data Chip (found in the northeast corner of the Biosphere). An IEVA Suit from the Space Suit Plans (found in the southwest corner of the Space Center) may also be useful, in case anything goes wrong. All three items require level 2 Research and Engineering Software to be researched and produced, as well as a number of level 3 Biosphere and level 2 Mine materials. 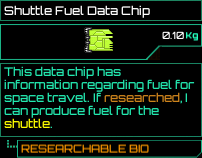 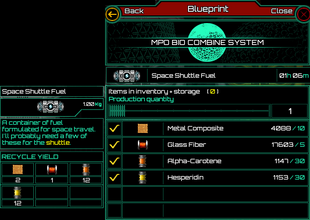 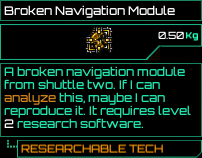 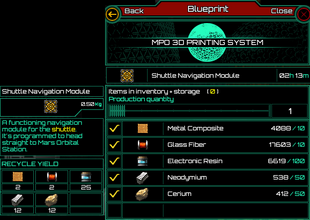 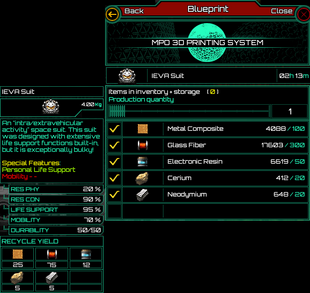 Add a photo to this gallery
Retrieved from "https://subterrain.fandom.com/wiki/Murray_Space_Center?oldid=4848"
Community content is available under CC-BY-SA unless otherwise noted.