Keycards are objects that can be found almost anywhere in the game, commonly found in desks. They unlock any door that requires that particular keycard, and Albert West can only enter certain rooms with the proper keycard. All keycards weigh 0 kg and, with a few exceptions, have a stack limit of 1.

A hacked keycard is used to unlock doors that require it. Upon unlocking a door, one keycard is consumed and the door is permanently unlocked (it can still be closed). Each door requires a specific keycard class (A, B, or C) and no other class will be accepted. Hacked keycards of all classes are usually found in desks and occasionally in bathroom shelves, although these are not the only possibilities.

Class A is the least common of the three hacked keycard classes, in terms of both availability and use. Except for one class A in the MPO Prison and one in the Solar Casino, Class A spawns are random.

Some non-random doors that are locked by class A cards are:

Class B keycards are more often used for accessing random rooms than non-random rooms. The first locked door that Albert West encounters in the MPO Prison requires a class B keycard. The prison has only one other class B lock in its prison area, but this leads to more cells, which don't hold much in terms of loot. Beyond this, there are very few, if any, non-random class B doors.

Class C keycards are almost entirely dedicated to accessing random rooms, with only MPO Prison cells and the kitchen being locked behind class C doors. Thus, similarly to class B keycards, class C is primarily useful for accessing the randomly generated rooms in the inner and outer sectors.

For the keycard that opens Nilson Engineering's side, see Research Sub-Door. 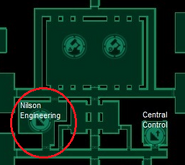 The location of the doors that are locked by Keycard - Engineering Sub-Door.

Found in a desk in Agatha Baxter's office, just south of the entrance to Herbert.

Found in a container on the south end of the research room.

Found in a container on the south end of the research room.

The Keycard to the Generator Room opens doors that lead directly to the Power Generator in Central Control. Two copies of the keycard can be found in the Power Control room, which requires the respective keycard. This is the only non-hacked keycard with a stack limit that isn't 1 (it's 2). 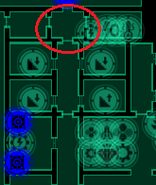 The location of the doors that require Keycard - Generator Room.

Found in the southeastern computer console in the Power Control Room. 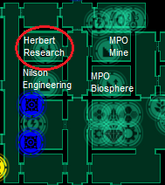 The location of the door that is locked by Keycard - Herbert Research. 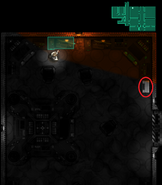 Found inside a drawer in the Power Control Room. Also in a crate near the entrance to the room.

Found in the southwest corner of Herbert Research, in the second room from the north. 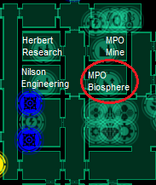 The location of the door that is locked by Keycard - MPO Biosphere.

Found next to the Bio Research System in the center of Herbert Research.

Found in a medical office on the western side of Herbert Research.

Found in the south-most bedroom. The bedrooms are in the southwestern part of Herbert Research.

The Keycard to the MPO Mine grants access to the Mine via a staircase in Central Control. It is found in Nilson Engineering, in a crate directly north of the entrance, just in front of the power recharging station.

Found directly north of the entrance to Nilson. 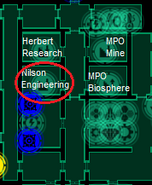 The location of the door that is locked by Keycard - Nilson Engineering. 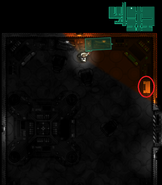 Found inside a drawer in the Power Control Room. Also in a crate near the entrance to the room. 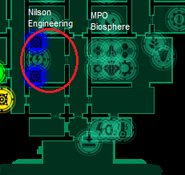 The location of the door that is locked by Keycard - Power Control Room. 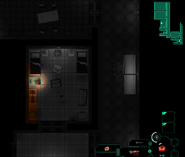 Found in a bedroom in western Central Control.

The Keycard to Prison Gate opens the door in the MPO Prison that leads to the tram. If the tutorial is skipped, then this keycard cannot be found since the door will already be open.

Found in the western room right next to the locked door.

For the keycard that opens Nilson Engineering's side, see Engineering Sub-Door.

The location of the door that requires Keycard - Research Sub-Door.

Found in a desk that's in an office on the eastern side of Nilson.

The Keycard to the Space Center is used to open the first door of the space center, allowing access to the entirety of the facility. It is found in Spirit Plaza's ground floor (F00) in the northeast corner, in a side bag in a kitchen along with a mess of snacks. 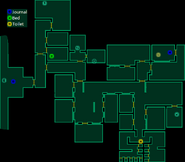 The map of Spirit Plaza's ground floor, where the keycard is found.

Zeronica Jones' Keycard is used to access a room in District Aries. The room contains the level 4 biosphere data chip. 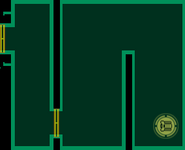 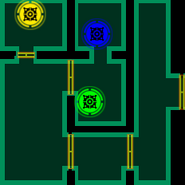 Found in Zeronica's suite in District Pisces, with the level 3 data chip. 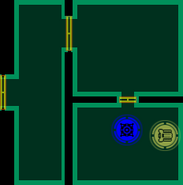 The Mansion Gate Keypass is a keycard-like item that is used to exit Murray Mansion via tram. It is found in the mansion's Basement 1 (F02), near the save point.

The Mansion Security Door Keypass is a keycard-like item that is used to open a series of locked doors in the northern portion of Murray Mansion's F01, as well as one door in F02. There are several locked doors and thus several keypasses; they are always found in a physically large container with at least one journal. In the map, the blue beacons in the northwest, northeast, and east are the locations of the keypasses. In F02, the keypass is in the western room and opens the eastern room. 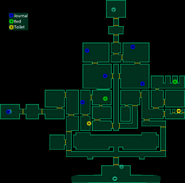 The map of Murray Mansion's F01.
Community content is available under CC-BY-SA unless otherwise noted.
Advertisement